On the day before Thanksgiving, I was driving from Corning, New York to Massena, New York, in order to spend the holiday with my grandmother.  Somewhere between Ithaca and Cortland, I made a wrong turn, and I ended up driving through the tiny village of Virgil, no more than a crossroads, where there was an unusual massing of motorists, all turning in at one spot.  Naturally, my folklore sense sprung into action, and in a split second, I was turning into this full parking lot to find out what could possibly be motivating everyone else to drive through a harrowing snowstorm to a barn in the middle of nowhere.  It turns out, I was at Hollenbeck’s Cider Mill.  I end up at Cider Mills even when I’m not looking for them!  I swear, it’s a gift, or a Thanksgiving Miracle!  When I walked inside, there was a line of people snaking around the rather large interior, past large crates of apples, past displays of maple syrup and cheddar cheese, past the register where several cheerful ladies were writing up orders, and beyond to a room full of cardboard boxes.  There were probably upwards of 100 people waiting courteously in line.  Are they picking up specially ordered Thanksgiving Turkeys, I wondered?  No – they were all waiting in line for apple pie.

I asked one gentleman what it was all about.  He’d been waiting in line 15-20 minutes and still had some way to go.  He said it was all about the pies.  The best pies around – the best pies in the State of New York, even.  It was an annual tradition.  Last year, he said, the line had also gone out the door and into the parking lot.  I’m guessing the snow probably kept some folks away this year.

Make no mistake folks, I will be returning to Hollenbeck’s Cider Mill to sample the pie, as well as the cider.  Dedication like this must mean something.  I didn’t have time to wait in line – I had several more hours of driving over the river and through the woods to Grandma’s house through the snow.  Happy Thanksgiving, and God Bless these pie makers and the cider pressers. 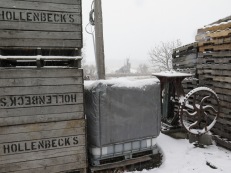 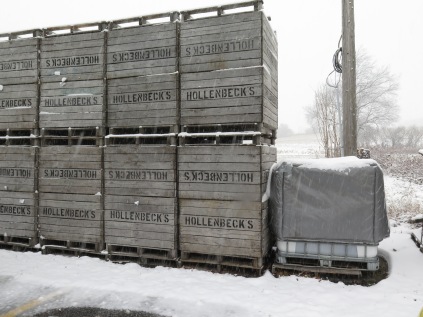 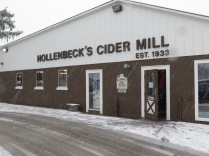