Lambic, the Cider of Beers

Posted on September 27, 2014 by teapottipper

Today, I want to talk about Belgian beer. I’ve been doing some travelling in Europe to attend a conference. Brussels happened to be the cheapest airport to fly into, which to me, was the universe telling me to go explore the history of my favorite beers. It might not be cider, but it is close, and I’ll explain why as we go.

I first learned to drink beer in Montreal, when I went to college. Not a bad place for beer – Quebec makes some great ones and is unapologetic about its drinking habits. The legal drinking age is still 18, and one of the dorms at the university is even named ‘Molson.’ I remember regularly quaffing Griffon and Boreal in smoky bars while discussing modernist Canadian poetry. So, beer was good, but still not something I found particularly exciting.

I really learned to love beer from a former boyfriend who was a bartender.   We didn’t work out in the end. But, I did learn a lot about beer from

him, and on his advice I tried for the first time things like Tripel Karmeliet, Veuuve, Trappists Rochefort, and kriek. I really loved the various tastes of Belgian beers – the light, floral, slightly spicy aromas and sour tastes. Trappists Rochefort had such a rich, smooth, malty sweetness.  This was the kind of beer you could think about and talk about, the kind that turns you into a beer nerd – a delight for the senses rather than just something to thoughtlessly drain from your glass at a party.

I’d learned to love the tastes of Belgian beer over the years, but I didn’t know very much about it, so it was the perfect opportunity while in Brussels to take the Brussels Beer Tour. You could probably accomplish all the things on the tour on your own by tracking down all the locations and doing some background reading. But I only had 1 full day in Brussels, so the tour was a great way to get it all in at once, with a great guide. At 45 euros, it was a little pricey, but considering you get to taste 5 beers (probably a total volume of 3 pints) and a guided 3-4 hour tour with a very entertaining and witty guide, it was well worth it.  We began the tour with a discussion of trappist beer in the oldest pub in Brussels, Au Bon Vieux Temps, serving beer since 1695. 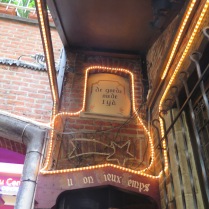 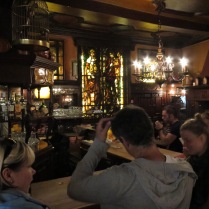 For those who love traditional cider, I’d say learning about Belgian beer is a wonderful complement of knowledge, especially regarding the production methods, traditions, and tastes of open-fermented lambic.  Lambic, I learned, is not just fruity beer. It is traditionally an open-fermented beer, meaning it is made without the use of commercial yeast. Traditional cider is made in a similar way, allowing the yeasts present in the air and the environment to inoculate the juice and begin the fermentation. Lambic is made in the winter, taking advantage of cold temperatures to quickly cool the wort after boiling it, to discourage bacterial growth end encourage ideal yeast inoculation from the air.

Of course, before Pasteur isolated yeast in the mid 19th century, all fermented beverages were made this way. So, as our tour guide reminded us while tasting the sour lambic, this is probably what all beer tasted like before the use of commercial yeast strains. The similarity of taste between lambic and farmhouse cider was quite striking – and the tour guide actually explicitly remarked on traditional cider as a taste comparison. Many of the folks on the tour found the sour lambic to be a challenging taste. Of course, I loved it! The sour fruity taste of traditional lambic is characteristic of the open fermentation process, and has nothing to do with added fruit, though fruit flavoured lambics, such as the famous kriek, also made. 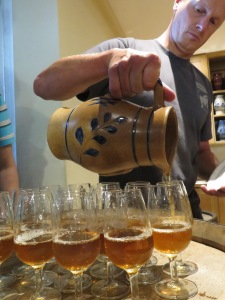 Pouring Lambic in the tasting room at Cantillon

We also had the opportunity to taste Kriek, made by inducing a second fermentation of lambic in the presence of sour cherries, as well as Gueuze, a blend of 1, 2 and 3 year old lambics. The younger lambic, not entirely fermented, induces a second fermentation in the bottle, creating a slight sparkle to the beer. This is where I experienced the true champagne of beer.

All of this, and much more, we learned during our tour of Canitillon, a traditional brewery within the city of Brussels. I met a very enthusiastic guy from Los Angeles who seemed to be a long-time follower of the brewery, who told me that the current owner’s father saved the brewery when all the rest in Brussels went under by selling door to door. Indeed, as we toured through the facility, our guide pointed out all the production machinery had been bought second-hand in the 1930s, some of it dating from the late 19th and early 20th century. The copper boiling vats and the enormous shallow copper pan where the wort is cooled quickly and exposed to the air for yeast inoculation were particularly impressive. 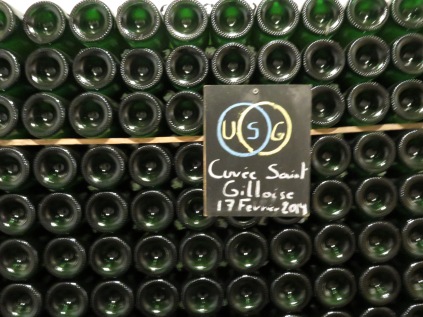 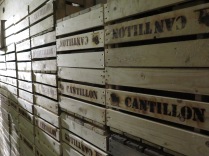 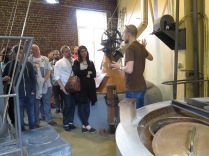 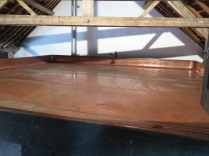 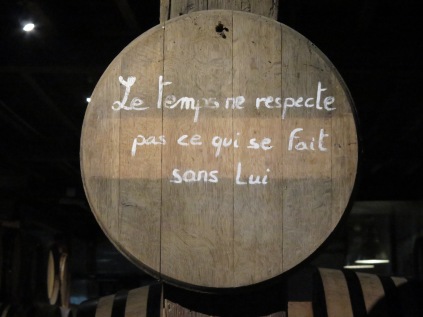 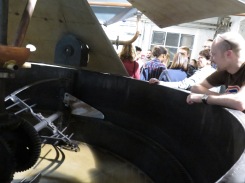 I don’t want to explain too much about lambic production, as it is all still mostly new to me. But there is something about open-fermentation that remains mysterious, magical, and unique among craft beers and ciders. This, to me, is the real taste of place – where the resident natural yeasts play just as big a part in terroir as soil type, fruit varieties, or traditional recipes.

What impresses me about quality open fermented drinks is the cooperation between the brewer / cider maker with his environment. Even though it happens spontaneously, the producer has to create the ideal conditions, so that the natural yeasts grow and undesirable organisms don’t take over.

All in all, the magic of open fermentation is something I hope more brewers experiment with.  And Belgium?  It was fantastic.  I’d live in Brussels any day. 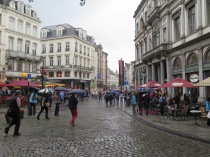 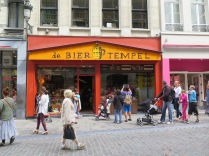 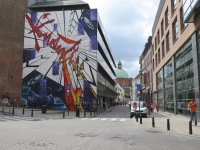