During my research in England, I wrote some observations (reposted below) about my encounters with mistletoe, and I recently got to revisit them in a conversation with Annie Corrigan on WFIU Radio’s Earth Eats Program.  If you are interested in further information on mistletoe, please visit pages by Jonathan Briggs, whose work has brought the botany, conservation, and social history of mistletoe out of the orchard and into the 21rst century: Mistletoe Matters and Jonathan’s Mistletoe Diary. 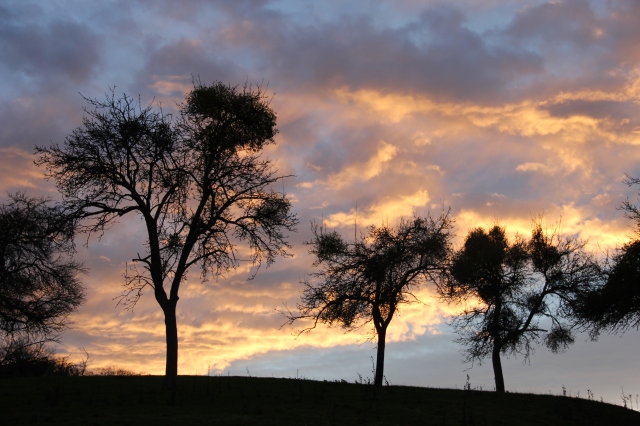 December 8, 2011.  It is a windy, rainy day outside, and at 3:30pm, I definitely need the lights on inside.  I am perched on my little snug chair next to the woodstove. The darkness of winter here has definitely been one of the hardest things for me to deal with, and if left to natural devices, I would probably take a cue from the other furry mammals about and go into hibernation for the next few months.  The days are definitely shorter here than back at home, but I think part of it is the fact that my fieldwork takes me outside a lot.  Instead of being compelled to get to work in a lighted building for eight hours, I find the waxing and waning of the sun’s light has a much greater influence on my experience of the working day.

During this dark period, another product of the orchard has preoccupied me for the past several weeks, and that is mistletoe.  I only learned that mistletoe favored growing on apple trees, and particularly in the south-west midlands of Britain, in October, when my wwoof host at the Hatch pointed it out to me as we were harvesting apples and pears from the orchard.  He mentioned that he used to sell the mistletoe, but the comment escaped my notice until someone mentioned the Tenbury Wells Mistletoe Auction to me some time later.

The town of Tenbury Wells is located just on the borders of three counties – Herefordshire, Shropshire, and Worcestershire.  And allegedly, these mistletoe auctions have been going on for the past 150 years, though they were threatened with closure recently when the cattle market, where they were held, closed.  In an effort to help save the auctions and retain one of the town’s claims to fame, some folks cooked up the Mistletoe Festival, complete with a mistletoe queen, a Druid procession, and various other Christmas activities.  You can read more about it on their website here. 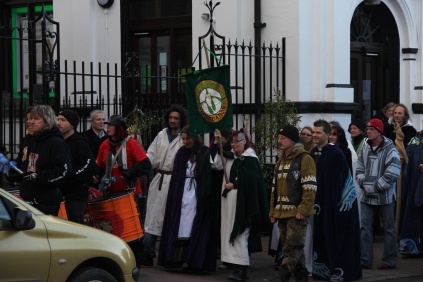 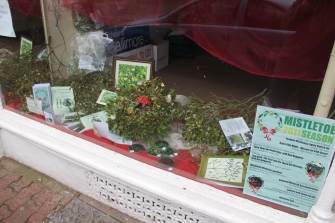 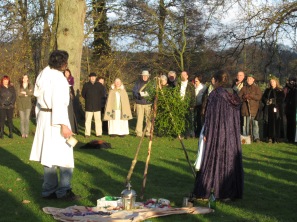 While the festival itself is, of course, interesting as a consciously invented tradition, I was actually more interested in the relationship of the mistletoe sales to the issues of orchard management.  It turns out that mistletoe thrives in old and traditionally managed orchards. I sent off some inquiring emails to the estate agents who run the auction, and received a reply from a local farmer who was happy to talk to me.

Armed with my photographic equipment, I set off to the first auction, which happened on Nov 29th.  Turns out I wasn’t the only one with a camera.  There were LOADS of camera-toting people there, from amateur on-lookers to highly professional rigs.  One guy, who turned out to be a floral photographer, even had his assistant/model, all dolled up in ‘authentic’ looking pristine wellies and beautifully matching fuzzy lavender hat and gloves, posing as if she was inspecting and buying the mistletoe.  The place was just dripping in nostalgia, or at least that is what all the photographers seemed to be framing in their cameras.

The actual business of the auction, though, seemed to go on without much notice of the photographers and onlookers.  And it was really business.  The auctioneer, with hs portable loudspeaker and cadre of assistants keeping track of the lot numbers, bidders, and prices, moved up and down the rows of wreaths, holly, and mistletoe, offering a starting price, sometimes with a comment to the quality (“look at the berries on that”) and taking the bids from the small crowd of what seemed to be seasoned veteran buyers. People in the middle of conducting business transactions aren’t terribly interested in being interviewed, so this situation required a lot more courage, so to speak, on my part, going up to people and asking if they would answer a few questions in between hauling their green purchases to their vans, lorries, and cars. 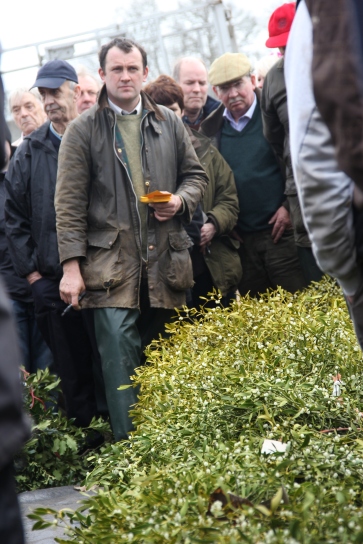 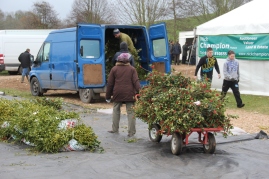 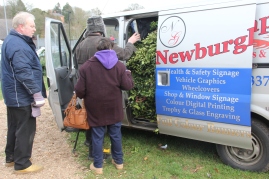 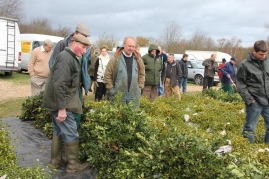 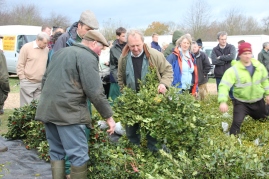 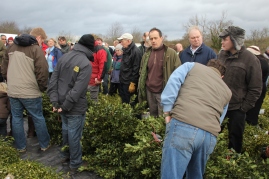 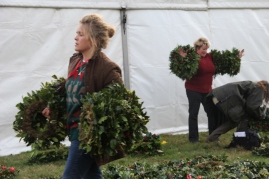 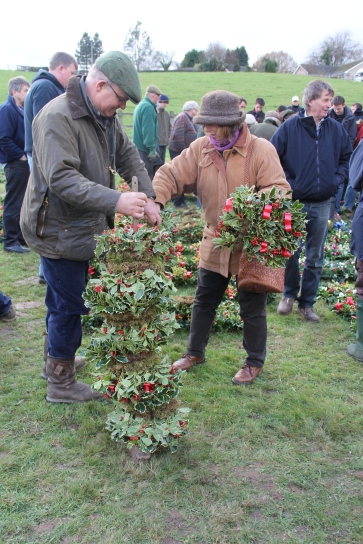 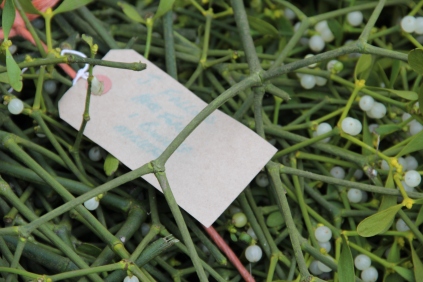 The guys pictured here had driven all the way from Cork, Ireland and slept in their van and were filling it to the brim for the trip home, where they would sell it through their Christmas tree yard.  They were very friendly. Many of the buyers were from florists and garden centers, along with some other small scale Christmas t 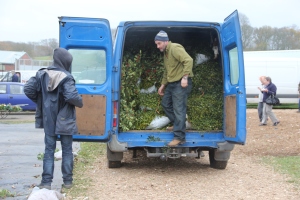 ree vendors.  My best tactic for talking to people seemed to be to stand near the bidding action, and turn to the person next to me to ask if they were selling or buying, and launch into an uninvited conversation.  The next week, when I returned for the next auction, I came armed with a printed survey in self-addressed, stamped, envelopes, which I could simply give to people to complete and mail back to me at their leisure.  Even so, it was hard to get it into a lot of hands.  I didn’t meet any sellers, but on my second visit, I walked up and down the rows of mistletoe and holly writing down the names and addresses of the sellers written on the tags of each lot.  Not all had addresses, but it might be a start for contacting sellers and talking to them later.

One group of people whom I have not had the courage to talk to yet are the gypsies.  Along with the farmers who bring mistletoe from their orchards to sell, there are 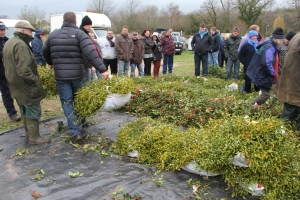 groups of gypsies who gather it from farmers’ orchards and sell it on at the auction.  I did walk up to two men who seemed to be lingering by the side of the auction yard among groups of people whom I took to be gypsies.  As I tried to start a conversation with them, their first question was if I was a journalist, after which, one of them ranted for a bit about how it wasn’t all christmas cheer and roses harvesting the mistletoe.  It was hard work, at which point, he pulled up his sweater to show me an enormous scar running across his side and up to his ribcage.  I attempted to banter for a bit, and they seemed to warm up to me, but I decided not to push questions.  Maybe later.

I did go visit one farm, Eastham Court Farm near Tenbury Wells. I was greeted, to my surprise, by a 22-year old guy, recently graduated from an engineering degree, who had moved home to his parents’ farm.  And while he was sorting out what to do next, he had taken their mistletoe business in hand and set up an online direct-sales business, bypassing the auction.  You can find his website here.  He emphasized the need for farmers to change and adapt to new ways of doing business.  He took me out into their orchards: organic, 60-year old orchards which he seemed to think were in definite decline.  Even though they were lovely places to be, with their widely spaced, large, old trees, he didn’t think orchards like this would last much longer, as newer orchards with more closely-spaced, smaller trees were replanted. And there was the mistletoe, hanging in lacy green orbs from the branches of the trees, sometimes almost overwhelming them.  The farmers have to cut it back every year, or it will sap the energy of the tree and decrease the apple harvest, if not kill it slowly outright.  Piles of mistletoe lay on the ground, much of it to be discarded, as there was just too much even to sell. 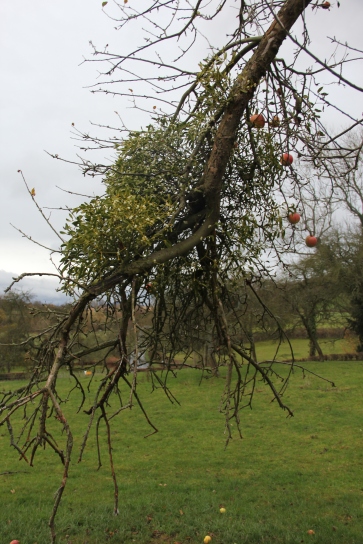 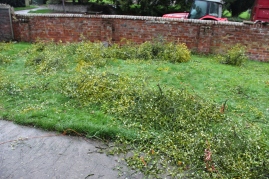 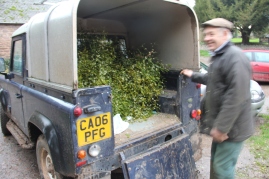 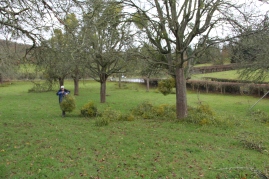 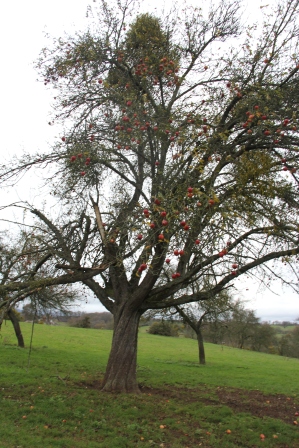 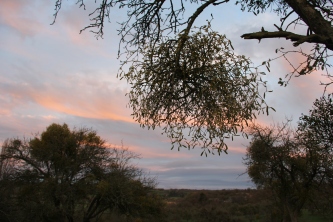 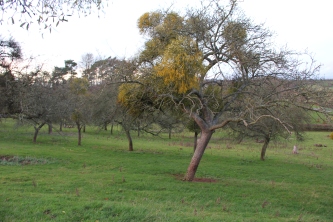