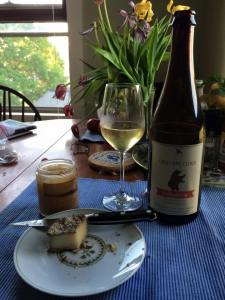 I was drinking a cider and admiring a cheese.   And then I had some cheese thoughts that my friends seemed to enjoy.  Following this, I decided that the cider blog should definitely have a Cheese Meditation Minute every so often.  Because really, what is  cider without a good cheese?  The men of Compost Heap know this well.

As I was waiting for a train in Grand Central Station, I wandered into the Grand Central Market, where the Murray’s Cheese booth beckoned to me with its tempting artful piles of sculpted dairy.  My train ticket was to Beacon, a little town on the Hudson, and thus the name on a small round of cheese caught my eye: The Hudson Flower, a sheep’s milk cheese made by the Old Chatham Sheepherding Co.  Its rind was covered in hop flowers and rosemary, and I decided it would be coming home with me.  It seemed appropriate to pair a flower-covered cheese with my spring blossom pilgrimage.  Also, it was my birthday.  Some people have night cheese.  I have birthday cheese.

A train ride, a long drive, and a few days later, I finally unwrapped this beauty in the company of a bottle of Good Life Cazenovia Hard Cider and a pot of New York wildflower honey.  A perfect trifecta of New York made delicacies.

But the tastes of this cheese initiated a cascade of cheese memories.  Did you think cheese could have this effect on a person?  Now I am thinking of other herb encrusted, flower pressed cheeses that have crossed my path. One is the Hereford Hop, made by Charles Martell, who has preserved and reintroduced many heritage agriculture products of his Gloucestershire region on the west side of the Severn River, including heritage breeds of cattle, cheese, apples, and pears.  The Hereford Hop became one of my favorite cheeses when I lived in Herefordshire.  Hops were a traditional crop for much of the 19th and early 20th centuries in Herefordshire.  Toasted and pressed into the rind, they added a strangely robust nutty floral taste to the hearty cheddar-like cheese.  I purchased it for my farewell party when I left the UK – I think I wanted the memories of farewell to mingle with the taste of Hereford Hop, washed down with bottle-conditioned Dabinette from Mike’s cellar.  I still think about it in moments of gastronomic anglophile reverie.

The other cheese that rose to my mind was the Juliana by Capriole, a goat’s milk cheese made with rosemary and herbs in the rind.  This is very similar to the Hudson Flower itself, but the Capriole was a little more sharp, with a goaty kick.  The Capriole is made in Southern Indiana, and I used to buy it at the Bloomington Farmer’s Market as a special treat.  Once, I visited the farm and creamery down in the rolling countryside north of the Ohio River.  I was always proud to know the Hoosier state I called home could produce such a cheese. Three cheeses, covered in herbs and flowers, made near three beautiful rivers, in three places close to my heart.  Now that feels worthy of a satisfied sigh of creamery nostalgia for a breezy May day. This has been your Cheese Meditation Minute with Maria.  Good Evening, and Bon Fromage!