It’s November, and we’ve had our first snow here in Indiana.  After the immersive and intensive dive into NY Cider Week, it’s been nice let my mind drift back to England as I spend time transcribing more interviews.  Somehow, I can’t seem to get the Somerset Levels out of my mind.  Maybe it’s the slant of light on the horizon that triggers the memory, or the temperature, dipping into the freezing temperatures.  It was about a year ago come December that I was visiting there, doing some interviews in the midst of a phenomenal flood. It’s a landscape famous for its orchards and its cider, but one I’ve only visited, not lived in.  This post is not about orchards and cider directly, but about a delicate landscape where they are part of a complex ecological and agricultural heritage.

I’ve been reading over Life on the Levels: Voices from a Working World, a collection of interviews with people whose lives are intimately connected to the unique landscape of the Levels, illustrated with elegant black and white photographs.  There is something about this particular landscape that I find personally extremely compelling, slightly mysterious.  The low-lying moors have been drained over the centuries, but the water still reigns here.  It is one of my favorite places to meander around the lanes, always slightly lost in the winding turns that take you around the moors, stumbling upon the high pieces of ground that have been prized spots for thousands of years, like the almost imperceptible hill on which stand the ruins of Muchelney Abbey, where the monks must have been really glad of dry land. Or the Glastonbury Tor, or the Burrow Mump, whose slopes are surrounded by the standard orchards of Burrow Hill Cider.  The apples, like the people, tend to cling to the high ground to keep their feet dry.

One interview in Life on the Levels, with RSPB Warden of West Sedgemoor John Humphrey in 1981, explores the myriad issues surrounding the relationship of ecological conservation and agriculture in the landscape with impressive breadth, opening with this quote:

“The progressive agriculturalist would see a traditional meadow here as really not being worth farming and would want to under-drain it, dry it out, plough it up and re-seed it….West Sedgemorr is a great mass of waterlogged peat which is…about fifteen feet deep.  And you’re supported by a skin of vegetation – that’s all that’s stopping you from sinking into this morass…”

This seems to be one of those delicate places where the environment pushes back relatively quickly – lets you know when you’ve pushed the boundaries of ecological manipulation too far, which is perhaps what gives it that sense of self-contained power and responsiveness.

Road through the flood

Burrow Hill in the distance 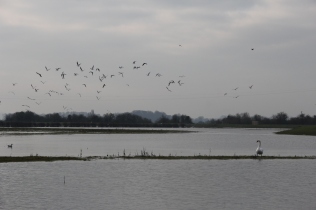 Birdlife on the Flood

When I was driving there last December, it was with some trepidation, as just days and weeks before, local people had been marooned in their houses, the roads impassible to all but tractors in the midst of the flood.  When I came, the waters had receded enough that the main roads were passable, but many of the fields were still covered with water.  Or rather, they were covered with ice, as the weather had turned cold and turned sections of the moors into sheets of glass.  Birds flocked to the open places in the ice, and it was hard not to be awed by the quiet beauty of the mauve twilight settling gently over these great reflecting watery moors chilled to a frost -covered stillness.  Though one could not forget also the agricultural and personal loss from these same floods.  Here are some articles detailing the damage from the Guardian and the Somerset County Gazette.

I spied some orchards by the side of the road encased in the ice, their trunks sealed in.  I stopped by Burrow Hill Cider just to climb to the top of the hill and look out over the vast icy lake that had formed in the moors below.  Landscapes like this provoke us to consider how agricultural heritage has helped shape the landscape, but also forces us to face the limits of human change.  Further into the book, another interview with details how aggressive drainage practices designed to promote arable agriculture can permanently affect the balance of the peat, cause the land the sink, and further exacerbate the flooding problem.