I got on the train back upstate and felt a wave of relief.  New York City is exciting but hard work.  I don’t know how you all do it down there in the City, day in and day out?  I picked up my car from my cousin’s house and took a meandering, semi-accidental tour of some of the orchards in the Hudson Valley / Catskills area.   Photos above are from my first stop at Dressel Orchard and Kettleborough Cider House, near New Paltz.

From there I proceeded towards the Gunks, passing another roadside orchard and some stunning views of pumpkin fields beneath the Gunks:

View of the Hudson Valley from the top of the Gunks

View of the Catskills from the top of the Gunks

This is the Pollywagen facing the Gunks, my trusty VW which has ferried me over many miles of road. By the end of this trip, she had clocked 125,000 miles in her lifespan. Let’s hope she keeps on rolling for awhile.

I then drove up to Stone Ridge Orchard and met up with a friend.  Pete, the guy manning the shop was really friendly and said he had been coming here for years before he started working there.  This orchard is operated by Elizabeth Ryan, maker of Hudson Valley Farmhouse Cider.  Check out also the Friends of Stone Ridge Orchard page. This orchard was really interesting, with lots of different varieties of fruit and styles of pruning in evidence. 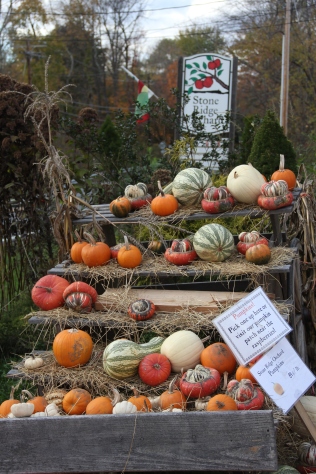 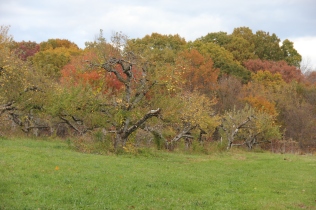 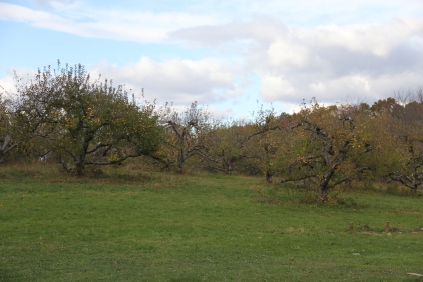 Finally, I drove out to visit some cousins in the Catskills, where I went to photograph the old North Branch Cidery in western Sullivan County.  I spent several summers working at WJFF Catskill Community Radio and hoeing weeds at Gorzynski’s Organic Farm, and I passed by this place many times.  My cousins remember when it was still operating, but is has been years now since it closed.  You can see a few apple trees on the property beyond the rusting truck and the buildings.  Andy Brennan posted this in a comment to another post on the blog:

Hey Maria, I don’t know much about the North Branch cidery either except everyone in the county tells me they used to bring their apples there to press. It was an old German guy who everyone loved and he had hard cider too, but I don’t think he legally sold it. I believe the ecoli scare and pasteurization laws forced the shut down about 12 years ago. Someone was working on the building not long ago but it still looks abandoned. -Andy

And after that, I headed home to Indiana.  I did actually follow the address to Eve’s Cidery in Van Etten, NY as I drove along the southern tier past the Finger Lakes region.  I drove by a large barn several times, but there was no sign, it looked like they weren’t set up for visitors, and I still had 400 miles to drive that day.  So I went on my way without stopping.  Someone waved at me though, after I drove by for the 4th time.  Probably they were wondering if the weirdo in the yellow VW beetle was lost, which is kind of true.  I mean, who drives to obscure orchards in search of cider?  I guess that’s me!