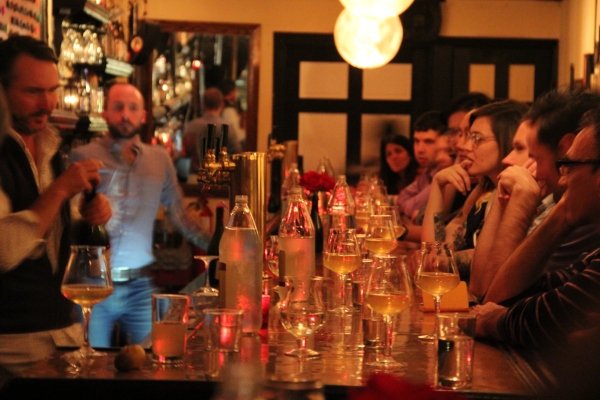 Crowded into a long narrow bar in the East Village called the Proletariat, where a steady stream of changing craft beers on tap lures beer geeks, a group of about 20-30 folks waited in the dim glow for the arrival of the hard-to-find and coveted ciders of Aaron Burr Cider.  Me, being the wide eyed Midwesterner that I am, had seen the event advertised in the NY Cider Week schedule and thought, oh, I will casually stop by at this event before dinner with my friend Challey.  Luckily, Challey knows the way NY works more the I, and she investigated further, messaged some people, found out the event was ticketed, tracked down the bar, and bought us the last two tickets.  I would have been OUT OF LUCK were it not for her keen City food scene skills.  Among the crowd were clearly some home cider makers, some people with a lot of knowledge about wine and beer but not about cider, and some totally new but enthusiastic folks who were devotees of the bar and trusted the bar staff when they said – come to this event.  I also was pleased to meet another cider blogger: United States of Cider. 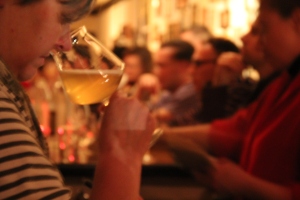 So, I spend most of my time with academics, farmers, and craft producers, not urban foodies, and I have to say, urban foodies massively intimidate me, even though I probably can match them point for point on food, wine, and especially, cider knowledge .  It’s just the way they frame their questions (more like short soliloquies) with tones of assurance, peppered with casual references to nuggets of information indicating their level of taste, which makes me want to back wide-eyed into a corner with my notebook.  Luckily, my foodie friend Challey, who works as a director at the Greenmarket, is a fabulous champion of provincials like me and was instrumental in helping me navigate my sojourn into the foodie beast of NY Cider Week in the city.  Nonetheless, I sat in awe of the New Yorkers at this bar who were practically tripping over each other’s tongues to get in questions with Andy Brennan, who was winningly both modest, soft-spoken, eloquent, and a great story-teller of cider. 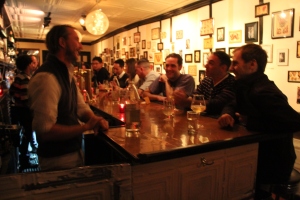 I’ve heard and read a lot about Aaron Burr Cider, and I think that the mystique of the foraged fruit touches a nerve for the American foodie that sends a certain exciting shiver up the culinary spine.  In fact, at another cider event, when I asked another panel of cider makers if there was any long term interest in developing uniquely American, regional cider apple varietals instead of turning to French, English, and Spanish origin fruit, one man said his fantasy was that there was some wild tree out there waiting to be discovered that had some amazing, yet-unknown flavors that would make a unique, wild, native American cider.  And a member of the audience said: “Well, that is just what Andy Brennan is doing with his foraging.”

There is something about the idea of an American wild apple, uncultivated apple that speaks to the American food imagination.  In this fantasy are the beginnings a new American cider mythology – one that taps into tales of Johnny Appleseed, our peripatetic tree-planting legend, and his semi-cultivation of wild landscapes.

The thing is, many of the landscapes settlers cultivated in the past, wresting farmland out of the forest, have become overgrown, taken back into the wild, as marginal land has become uneconomical to farm and farm economies have changed.  The Catskill / Hudson Valley area where Andy Brennan forages his fruit is one such landscape, where cultivated trees leftover from re-wilded farms dot the landscape and tell a story of un-cultivation that is little understood but ripe with mystery, full of the fruiting ghosts of farms past.

England has a similar story of orchards left-over from dead farm economies, but there is no wilderness in England to grow back over the land and around the apple trees.  Instead, these old trees become singular markers in grazed fields, or untended corners of a farmhouse property sold to urban professionals who like the view but know nothing about the apples.  There are foragers in England too, but they are looking for old, heritage fruits, instead of wild fruits, though the interest in roadside apple trees, grown from the pips of eating apples discarded out the car window, is also growing.

“Wild” apples are never entirely new though.  Even trees that sprout by the side of the road from a discarded apple have stories to tell about their origins in other cultivated or culinary pasts.  Brennan’s foraged ciders appeal to the American story of forging into the wilderness to carve out a culture of our own.  In a place where American cider history and culture has mostly been lost and forgotten, the idea of starting anew with unique, “wild” apples is appealing to many people in the sense that they seem to appear out of nature, independent of history and the hand of man.  It also suggests that America has a complex terroir to draw upon that does not simply mimic the European models. But to me, wild apples harbour their own mysterious agricultural pasts and speak to the re-discovery of our landscapes and our foods.

My friend Challey was even more excited than I was to go to this event, as she had been hearing about Aaron Burr Cider for awhile but had never had a chance to taste it until just a few weeks ago at a friend’s bridal shower.  We were treated to generous tastes of six different Aaron Burr ciders.  Here’s the rundown of what we tasted, with some of the commentary, questions, and answers that crossed the crowd, paraphrased and summarized:

Golden Russet. This cider is made from mostly golden russet apples, with a few Northern Spy thrown in.  Brennan commented that the Golden Russet lacks the acidity to be a total single variety cider on its own.  He described it as perfumey, with a high sugar content, explaining that the tannin content was higher from the russetting on the apple, and that the higher tannin and higher alcohol allowed the cider the possibility of more aging, which he liked.

Q: What apples the first settlers were growing in America?

A: Besides the crab apples native to America, Andy explained, all apples we know for eating came over starting with the Mayflower, and all apples grown in the Northeast today are descendants of these European apples.

Q: Tannins?  Is it like red wine?  What are the varietals and how do you choose them?

A: “Every apple is a good apple to me.”  But Brennan went on to comment that he doesn’t put every cider he makes into his final blends.  He said he ferments over the winter, with the final change in flavors coming in the spring when a malo-lactic fermentation may occur.

Q: There are only a few varieties that can be single variety ciders?

A: Yes, it’s a lot like wine.  Only Americans are obsessed with single varieties.  Apples even more than grapes need to be balanced.  There are four things you are trying to balance: Acidity, Tanin, Sugar, Aroma.  It really is an art trying to bring those characters together – like bringing a still life together and letting all those objects live together.

Q: Do you blend different vintages?

A: Yes.  I am open to blending different years.  It’s like having an extra colour for next year’s cider.

Traminette.  Made from Golden Russet and four other apples, including MacIntosh for a floral note, this cider came about because Andy wanted something like a champagne – something like a picnic drink.  You could pair it with food, but it is great as a for walking around, a party drink.  It is very perfumey, a fruity taste almost like grapefruit and wonderfully bubbly, similar to the taste of Traminette wine, a white grape varietal related to Gewurztraminer.  Murmurs of delight wafted up from the crowd as they started to sip this beverage, and everyone seemed to be smiling and thinking of summer.  Brennan made a nod to the English invention of champagne method (which I think should be renamed the “Glasshouse method” in reference to the spot on May Hill in Gloucestershire where Huguenot glassmakers helped develop pressure-resistant bottle glass) and the efforts of Lord Scudamore as he outlined the details of the method to illustrate the craft method of carbonation as opposed to modern forced carbonation.

Q: I made cider at home and it turned out more like Chardonnay?  How do I get that apple essence that some of the more commercial ciders have?

Homestead Apple. Made from foraged fruit.

Q: What are you doing with the must?

A: We have one guy who distills but I use it mostly as a nursery for future trees.  I’ve got 400 trees planted.  I was buying cider trees from Europe but I decided we had all the varieties we needed and more right here.  Right now my nursery is trees I find in the wild that I want to keep, trees I find on property that isn’t mine that I want to save.  More than cider I want the trees.  I take the graft wood in the winter and put it on to our trees.  I keep finding trees I want to save.  It’s like our tree orphanage.

Elderberry.  This spicy aromatic drink had extra depth and rich flavour.  Brennan said this was what he made when he wanted a winter drink, something to go with chocolate, somethingthat felt woody and earthy and foresty.  It also includes a touch of sumac to enhace the lemony and acidic flavors.  He said that as the water level in the barrel shrinks over time, they add huckleberries to keep things spinning over in the fermentation.

Q: What strains of yeast do you use – are you afraid of using the wild yeasts?

Homestead Pear.  I think Brennan used the word “vulgar” to describe the scent of this perry, and he was right.  It was a ripe old aroma.  But the taste was wonderfully delicate and just like pear.  He described the fruit as a wild, foraged pear, with very delicate, sweet fruit inside a tannic, leathery shell – a smell in like a lion and a taste out like a lamb.

Ginger Apple.  Fermented on carrots, Brennan said he made this as a table wine, something to go with Thai food and sushi.  It really was the fresh spicy fruity taste you would expect from something you got at a juice bar, but much lighter.